Hey everyone, sorry it’s been awhile since I’ve wrote something. I was dealing with both a major writers block and some personal problems. But now I’m in a better position and hopefully I can get back to writing more blog posts. Any who on with the new post of the year!!

The 2019 Pokemon Korea VGC has begun back on December 23,2018. To be completely honest, I think it’s still weird that The Pokemon Company in Korea would hold an event so close to Christmas. But hey, what can you do.

On the flip side though, after losing a lot of face, Pokemon Korea has finally lifted the ban on foreigners from competing in the tournaments.  In early 2018, the company would not allow foreigners to participate in the competitive scene. They honestly thought this tactic would scare the non Korean players away. Or that we wouldn’t do anything. Boy were they in for a rude awakening. One of the players and a good rival, was able to alert some news outlets about what happened. Hell there was a lengthy reddit post about this BS. Now waygooks can play as long as they have some proof of residency and an ID.  Now was that so hard Korea???

So I spent the month of November prepping for the event and on the day of the VGC. Sadly, things didn’t go as planned. I unfortunately made the wrong team for the tournament. so I had to scramble and make a new team. Mind you this all occurred around 9:55am and the registration processed closed at 10:00am. Honestly, It wasn’t the team I wanted. But I had less than 2 minutes or I couldn’t compete.

One major thing I was happy was the new location. We had the even at the Dongdaemun Plaza in Seoul. This location was larger than previous events. Plus it was good to see some of the old players and friends up in Seoul again. So as me and the Waygook Squad was waiting for the event to start, lo and behold I see other players pulling out their Nintendo Switch and playing some Super Smash Bros Ultimate.

Now your boy loves a good game of Smash Bros. If I see a match going on, I got to hop on it. So I broke out the Switch and started playing with some Korean players. I can tell they were having fun playing against a foreigner. And I will admit some of them provided a decent challenge. Not enough to lean me forward and go ham.

So the Pokemon VGC starts up and I lost the first two rounds with my crappy team. But I always take one with me. But that’s when things went downhill.

You see where the players are lined up right? That’s where the list of who your opponent is and where players are supposed to sit. The staff members kept changing the list over 5 GODDAMN TIMES!! And this happened throughout the event. I had to change seats twice at the start of the third round. 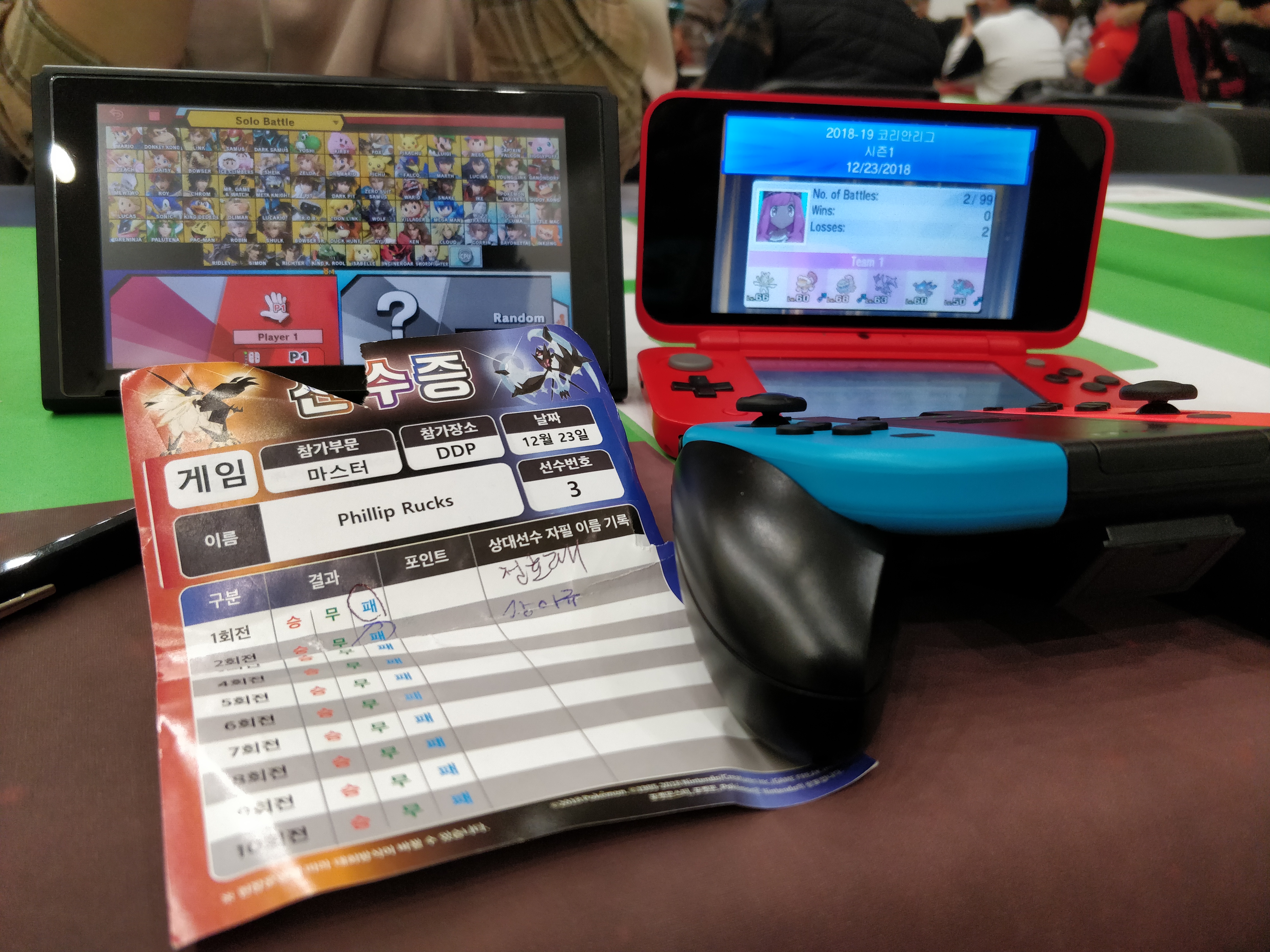 So how did me and some of the players calm down? With more Smash Bros of course!! Everyone was aggravated with the staff and how they weren’t prepared for this. So by the end of the VGC I was 2-3. The second win was due to a no show. I assume the individual gave up and left. After the qualifying rounds were over, I talked with friends and played more Smash. I’m going to try to post more in the future so stay tuned.

2 thoughts on “Pokemon VGC 2019: Foreigners Are Finally Allowed to Play in Korea??!!”