You ever had those moments when you went to an event on Saturday right? It was so much fun that you you hope this happens again in the future? Yeah that’s what I had over the weekend. On January 26th 2018, I participated in the 1st official Super Smash Bros Ultimate Tournament in Seoul, South Korea. I gotta admit it was a blast participating in this event. It took place at the famous Lotte World Tower in Jamsil, located in Seoul on the 31st floor. As always I stood out like sore thumb being the only foreigner…..at the moment though.

But before I get ahead of myself, lets rewind back to December 2018. I was at work checking my students grades. That’s when I decided to check Facebook and see if anything was happening. Turns out there was something lit coming up. In one of the gaming groups in Korea, someone posted that Nintendo of Korea was going to host an official Smash Bros Ultimate tournament in Seoul in January 2019. Compared to Pokemon, Smash bros is my life. This is the game I knew I actually had a chance to get far in a competitive format. I actually knew how to fight. I knew how to make my opponent sit up and become nervous. I got really hyped and knew I had to start training….after work of course.

I followed the link to the registration site and signed up. I got lucky because apparently, the sign up limit was 128 people. After I got registered and the page refreshed, all the spots were gone! This showed that many people were very interested in the Smash tournament. I saw various Facebook posts from people who tried to sign up were too late. It was disappointing to see that more foreigners couldn’t register due to the limited space. But I let it slide and went to read the rules for the tournament. And then it kinda ruined my day. The official Nintendo Korea rules were as followed:

After looking at these rules, I thought they couldn’t be serious about this. Unfortunately it was all true. Apparently they wanted to keep it friendly have a mass appeal. Just like Nintendo would always does.

I had to get up early and take the KTX to Seoul, since the sign in process began at 9:30 in the morning. Once I arrived in Jamsil, I entered the Lotte World Tower. The Nintendo staff provided with my number, score sheet, two thunder-sticks with the smash logo, and a Nintendo Switch catalog.  After obtaining these items, I rode the elevator up to the 31st floor all while having a big smile on my face. I was hyped and ready to battle both Korean and foreign players in a glorious Smash fest. Once again, I was the only foreigner at this event. I could feel all eyes on me. But then again I’m a 200cm black man in Asia, so of course I would get some looks. Excluding the staff members, about 97% of the participants were men. I believe the remaining 3% were women.

But thankfully I was not going to be the only foreigner there. I met a Twitch streamer(no I’m not being paid to promote him or the service) Whiteshadow2006. He was a pretty chill brotha and we hit it off quickly. I first met him in a discord group I’m in for Switch owners in Korea. While he missed the registration back in December 2018, he was able to participate due to a couple of no shows. Any who, both of us started some warm up matches with some of the other players until it was time start the event. When the time came, participants were lead into the theater and the announcer told us the rules. I was able to get the gist of what he was saying based on people’s feedback. What truly made me sit up was the announcement of a free lunch!!!! Nintendo Korea provided a 15000 Won($15) lunch voucher at any of the restaurants in the World Tower. That instantly made them alright in my book. 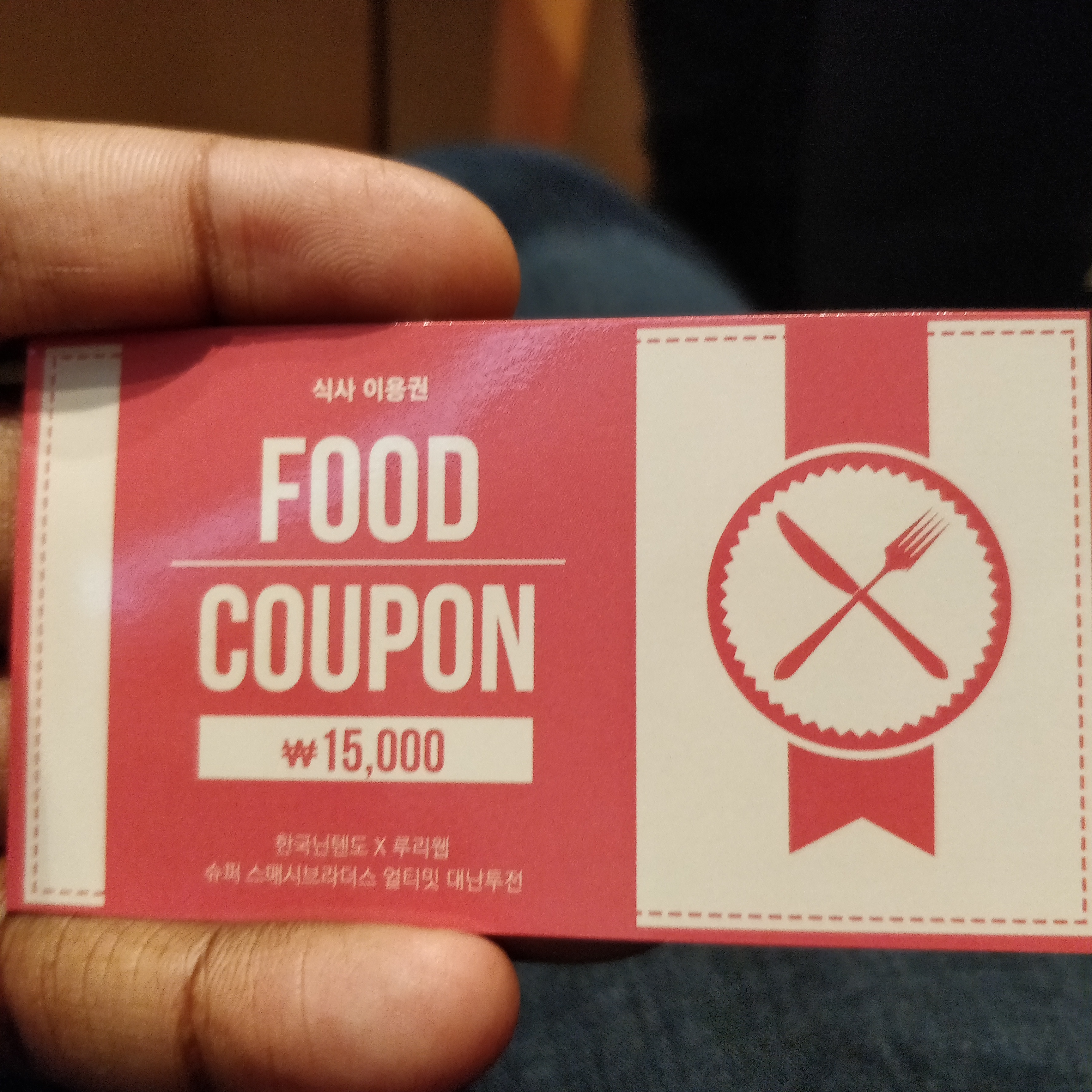 After the announcements were completed, there was a 10 minute grace period till the event. I got some warm up matches in  before the event. Then my number was called and I headed to my station. Some of the setups were by the window and had a great view of Jamsil. Another set up was in the theater…As mentioned before, the preliminary rounds would consist of 4 player free for all match. There was a time limit of 2:30 and with items on. However, in my group, there was only three players, since there was a no show. So now only first place would move on. Second and third place would play another round and winner would move on. I was able to win the first round. I’ll admit, I was very nervous throughout the event, despite making it to Semi’s. Unfortunately, I got knocked out the first round or the semifinals.  Whiteshadow, was eliminated in the first round.

I stayed through the event and watched the finals. The guy who knocked me out I believe, got second or third place. It was a hyped finals. The crowd, including myself, was on the edge of our seats the whole time. Each match was extremely close and no one was letting up. Once the tournament was over, the winners got a trophy and a Smash Bros cap. They also had a chance to say a few words. They all mentioned that items shouldn’t be a part of an official tournament like this. And how Nintendo of Korea should keep promoting Smash Bros and have more tournaments like this. Which everyone I talked to, was in agreement. The company has a chance to get an official Smash Bros scene going, they just need to promote it.

While the staff member was cleaning up the theater, they gave some people posters and backdrops used in the tournament. I was asked if I would like to take this smash poster with me. Hell yeah I wanted this!! It would make a great decoration for my class!!!

Unfortunately, I had to take it down due to parents complaining. They thought I was bringing a Switch to work……on a Monday and not teach class…..Ohhh Korea…….